skip to main | skip to sidebar

UEFI vs. Root Canal, You decide!

I spent the better part of last week (and a rather long portion of the end of the week bellyaching about it on Facebook) doing installation testing with some new Microsoft stuff. My work ground to a screeching halt once it became apparent that it is no longer easily possible to set up hard disks manually prior to installation. All of this due to the new GPT (GUID Partition Table) requirement for the OS. In fairness I had known about this change for some time and still I refrained from learning anything more about it than the little I got in passing. Since it didn't affect my daily life more than a footnote at the time, I think it was understandable that I didn't waste any effort digging further. My foray into hand creating GPT disks opened my eyes to all of the minuscule yet plague-like issues that can be caused by doing in wrong. Even the information provided by Microsoft appears incorrect. (I have one more series of tests before I conclude finally that they are. It is very likely that I am doing something minor that keeps it failing) The end result was that I let the OS have its head and partition the disk itself. Now, for clarity, let me say that this was a painless way to get the OS installed, but it left my inner tinkerer frustrated. I did some after action review and I will post the results of that in a moment.

At first glance, and as a user coming in from being Windows free for the last three years at least, Windows was hard to navigate. It took me a bit of doing to realize what was needed to advance from one screen to another once I had opened my e-mail from the start page (the start menu has been replaced by a page devoted to an Android-esque page of icons for what I assume to be frequently used items) Once I accomplished this it was on to discovering how to get to the desktop and then how to get to any program not listed on the normal desktop or the start page. (for reference, you right-click on the start page to bring up a bar on the bottom of the page that will take you to all programs... not terribly intuitive) Having provided a bit of criticism to those few bits I found maddening, I would like to say that I think Windows 8 is very pretty. The installation, once I surrendered to its whims, was painless and the initial usage issues, once learned beyond, make the interface useful indeed. There are still quite a number of things about it that I find annoying, but these I attribute to my overwhelming love for free and open source software. I find the test machine quick and responsive and the default apps useful in ways that they were not the last time I found myself in Windowsland. After leaving the device on for a time and eating a meal, I returned to find that the test machine had been powered off. Turning it back on revealed that it had been suspended, presumably to preserve power. I was surprised at how quickly it returned to a usable state.

Lest anyone think I have become over exuberant in my detraction from Windows or even my praise of those things I have always found taxing having been resolved, I will now turn some attention to OS testing I performed on Ubuntu 12.04.

My first installation was a clean install to one of my test laptops. (I never update versions or clean install on systems I do active work on. I recommend you don't either no matter the OS) My first impression was how very pretty the Unity interface was. It is something I have become accustomed to over the last little while, but that made the overall impression of change that much more noticeable. The menus are getting more and more stable and I didn't encounter any of the failures I had in previous installs to this same machine just several months before. Congrats team. Things continue to improve at a noticeable level. Now the bad news. There was a tremendous lag in any menu interaction. Transitions between windows were delayed and, in some cases, resulted in minor freeze ups of the interface. I have since seen information to suggest that this was a display driver issue. I have yet to test this theory and I would like to point out that at no time was the system completely unresponsive.

My upgrade testing encountered the same issues mentioned above with the exception that they resolved to a large extent once I downloaded updates. I don't recall if I did updates on the pure install, so that is another item to check when I go back to that machine early in the week.

That is the extent of what I have accomplished this past week in OS testing. I've done a ton of work on several other things that I can's give details on yet, but I plan to in the coming weeks.

I leave you now with some reference information on gdisk a GPT fdisk tool and some of the information from the Ubuntu community regarding UEFI that I found useful.

P.S. - Here is an image of the disk as partitioned by the MS installer. Note the differences in the actual versus the recommended sizes... minor, I know, but of note none the less. 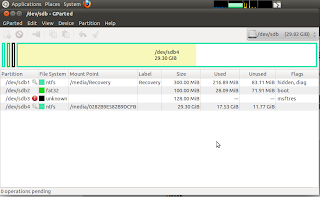